Six or so years ago, my husband and his best friend spent a day skiing with a classmate of my husband’s and her father. They raved about the skiing in this place called Revelstoke in British Columbia, Canada. I think it was a new resort at the time. (Wikipedia just told me it opened in December 2007.) My husband and his best friend have fantasized about skiing there ever since.

The two of them have been skiing together out west at least once a year (and usually more) for the past ten years. For the first six of those years, it was just the two of them and occasionally me and/or someone else who was available for a somewhat random ski hill meetup, like with Dan’s classmate. But for the past four years, it has been a bigger group/reunion, with a core group of six of us that all went to the same college, plus a few other friends or significant others each year. Four years ago, we rented a house outside Park City. I believe there were 7 of us that  year. The next year, we got a house (the best house ever) in Big Sky, Montana. We were… 12? that year. Again, friends from college, Atlanta, a friend of mine from Madison, and friends of friends. Last year was thrown together a little late – we were 8 staying in a not-as-great house in Salt Lake City and driving to ski resorts, but I had one of my favorite days skiing ever at Powder Mountain. And this year, finally, we made the trek to Revelstoke, Canada. This year there were 8 of us total.

It took 17 hours of traveling to get there, and 17 hours to get home yesterday. Both travel days, we had to wake up at 3 am local time. But it was worth it.

We got to see friends:

We met up with this guy in the Toronto airport. 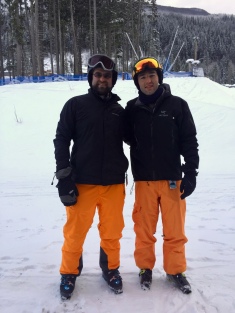 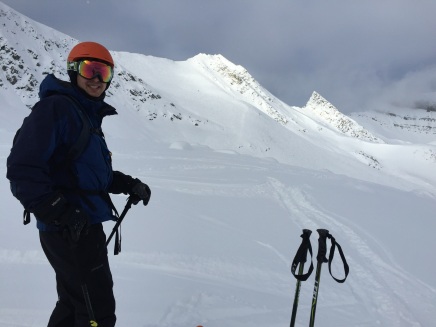 Dan in his element. 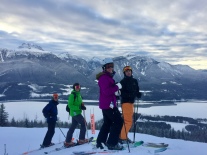 I did not go here, but I love this picture. 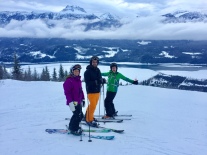 There were some amazing views of Revelstoke and the Columbia River: 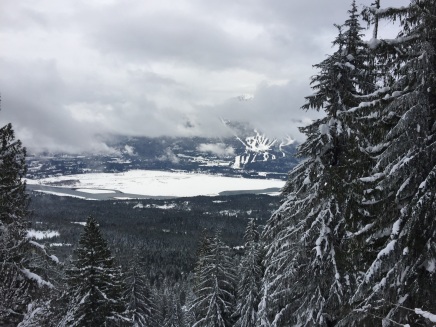 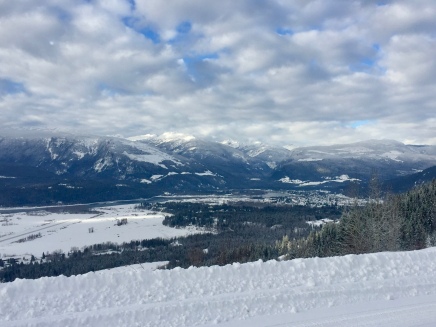 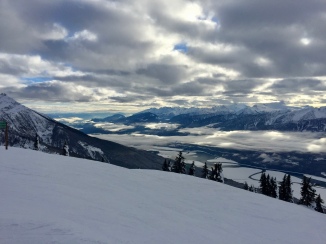 And Lake Louise in Banff: 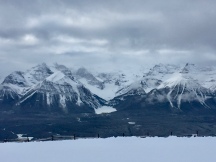 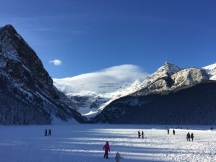 I didn’t take this picture. My friends, who flew into Calgary and drove to Revelstoke through Banff, took it on their way. 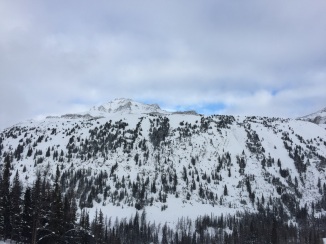 Plus I got to go for a short 3-mile hike, all by myself, fresh tracks, in Mount Revelstoke National Park (with snow up to my waist when I accidentally stepped off the path – the pictures don’t quite capture it): 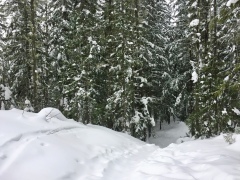 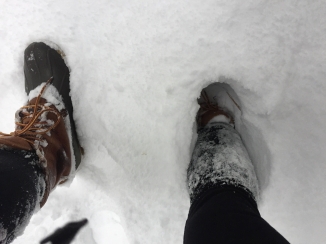 And see wildlife. In the middle of the Trans-Canada Highway: 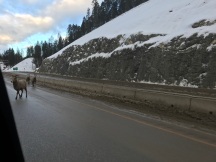 And eat good food. Some of which was only good-tasting if not good for me: 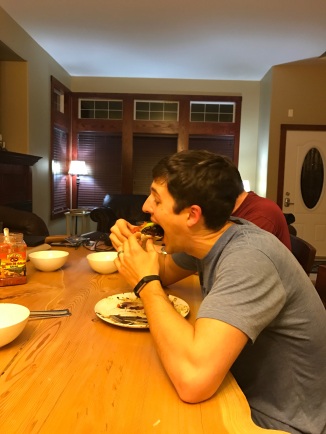 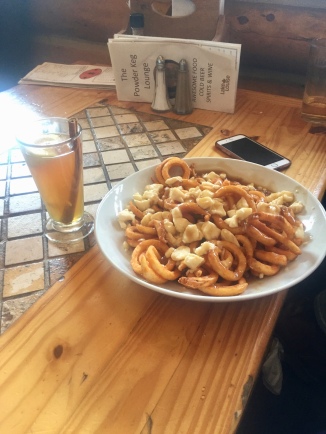 As far as eating goes, our MO has become a huge Costco shopping trip as soon as we arrive to purchase food for the week. Each person/couple takes a night to cook and populates a shared grocery shopping list in advance. We spend the last night (or in this case, two) eating leftovers. One or two people also take on sandwich-making duties each morning for everyone for on-mountain lunches. It works out great. Our Costco trip for 8 people this time for the week was under $500. That’s about $60/person for food for the week. Not bad. And everyone makes really good food. In the picture above, Dan is eating a taco filled with mole chicken we made together. For dinners, we ate:

We did pretty well this time not wasting any food. In past years, we’ve eaten at least one dinner out. This time, we didn’t do any (though I did fill up on that poutine in the picture above on the last day at the Lake Louise ski resort), but we probably should have eaten out the last night. We were really scrounging. But we got back from Lake Louise late after a harrowing 3.5 hour drive through fog and snowy roads along the Trans-Canada Highway and then had to get up at 3 am the next morning to drive 2.5 hours more, so eating out wasn’t really in the cards.

I skied 4 days – 3 at Revelstoke and 1 at Lake Louise. Two friends and I (we are known as the ‘Blue Crew,’ but have sort of graduated to the ‘Blue-Black Crew’) took a private lesson on the second afternoon that was a lot of fun. I like doing stuff that challenges me (i.e., not just the blue groomers), but I like having my hand held when I do it.

Revelstoke was amazing. It has the longest vertical in North America (5,620 feet). The longest run (the green run that goes from the top all the way down) is 9.5 miles long. It was exhausting. We got a fair amount of snow mid-week and had a lot of powder on Wednesday, which was incredible. So fun. Longer lift lines, unfortunately, but worth it.

Lake Louise was okay. It was kind of icy in parts and had less varied/interesting terrain. The view across the valley of Lake Louise was incredible, though. Pictures don’t do any of this justice. And I was sort of cold that day and pretty tired from the week. I only skied about 3.5 hours. Then I went to the pub and drank a hot toddy and ate poutine.

I always try to hike at least one day while on these ski trips. I love hiking in the snow. I’ve been fortunate to find  hikes that are manageable without snow shoes. (Except for that time two years ago in Big Sky when Dan and another friend and I hiked six miles into a canyon and definitely should have had snow shoes.) This hike was easily accessible from town, didn’t feel too remote to make me feel nervous, and elevated my heart rate at times but didn’t leave me exhausted. It was a rest day, after all.

All in all, a very good trip. I’m very glad to be home, though, and back to my routine. Like  most Sundays, yesterday I grocery shopped and made lunch for the week. And I was back at CrossFit this morning at 5:30 am…