Huge batch of egg bites for the weekday morning win. #breakfast #mealprep #neededtowritedowntherecioe
He definitely ate all the orecchiette pasta first, but then he rocked the rapini. #veggiewin #rapini #orecchiette #dipasquales #toddlerlunch
Devouring cauliflower as if they starved him at daycare today. 🤷‍♀️ #veggiesfirst #cauliflower #predinnersnacking
Recent posts on roasted carrots and cauliflower/potato soup. #carrots #roastedvegetables #fall #soup
Prepping vegetable packs for camping this weekend. Olive oil, salt, broccoli, red bell pepper, onion, and red potato. Bam. Wrap them up in foil, throw them on the fire, forget about them for a while, unwrap, and yum. #roastedvehetables #camping #mealprep #campfood
#cookonceeatallweek Week 14 Beef Ragu. #babyg is all about it. #dinner #mealprep #sundayfunday #zoodles

Guys. I am so excited about the jar salads I made this week. They were so good.

We got home from Japan late Friday, so I had all weekend to meal plan and prepare food for the week. (Side fact: I’m doing another Whole30! My third. I started Monday, so this is only day 3. The last I did was a year ago. I’d pretty much decided to do it post-Japan even before I left for the trip. I’d been eating crap just because it’s there and not feeling great and not being mindful and just wanted to take time to be more intentional about my food choices. Actually, it’s about habits. I like to reset and reform good habits. Then eventually they wear away, and I come back to reset them. Anyway, and then, when I was in Japan, I was craving vegetables. I usually eat so many vegetables and could not find enough vegetables. I loved the food there, but I was very excited to come home and do a Whole30. We’ll see how long that enthusiasm lasts. :-). Anyway.) Instead of falling back on my default salads, I googled for some inspiration. I found this Chicken, Apple, and Pecan Salad from Damn Delicious, and it is damn delicious.

Chicken salad is still sort of a new thing for me. I had never liked mayo until I started eating frites several years ago (they were sort of a thing for a while, right?) and realized that aioli is mayo. So I started making my own. Store-bought mayo still just seemed unappetizing, but homemade was yummy. I used to make it with canola or vegetable oil, you know, before I knew better. Now that I limit those oils, I haven’t found a good way to make it anymore. I tried avocado oil once and really didn’t like it. However, I do like the Primal Kitchen mayo from Thrive Market made with avocado oil. I still don’t use it a lot, so it’s been sitting in my fridge for a while, and it was nice to find an excuse to use it.

To Whole30-ify the recipe, I did not use dried cranberries nor Greek yogurt. Instead, I used a little bit more mayonnaise and a lot more freshly squeezed lemon. Also, my experience with kale in jar salads is that it smells terrible after even a day in a jar (tastes okay, but coworkers give you funny faces), so I used spinach instead.

Ohmygod, so good. I took the picture below after my first bite while sitting at my desk at work because I was so excited.

For better or worse, it takes a while to eat. Not sure why – so many chopped up parts maybe. I was trying to eat really quickly at my desk in between two meetings yesterday. My coworkers were waiting for me to walk with them to the second meeting in another building. I finally had to give up and put some of it back in the jar to eat later. Probably better to not force eating so quickly anyway. 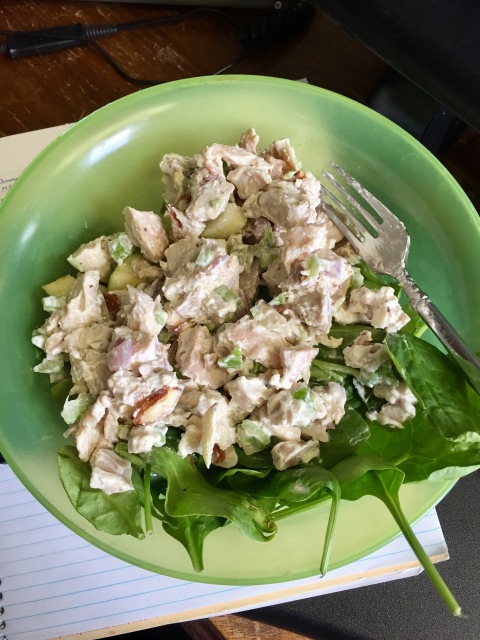