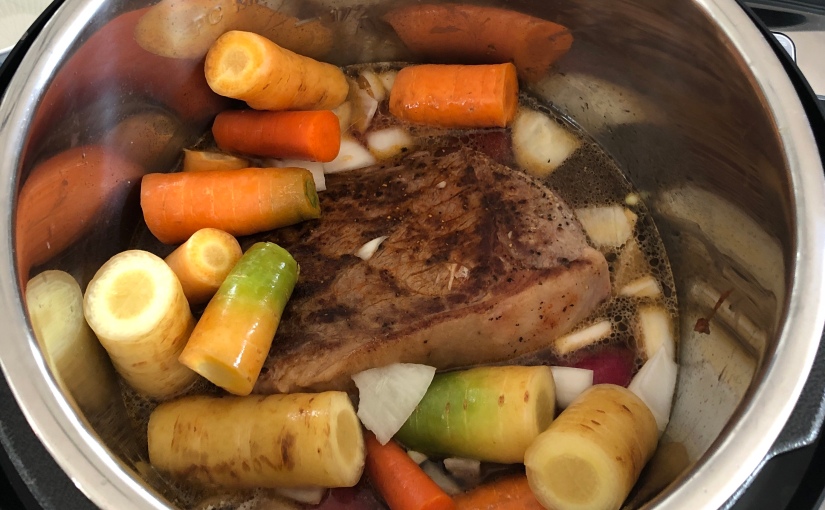 [Mostly written in January 2019, posted way late :/] I finally got an Instant Pot! Well, we got it – my husband and me, from my husband’s parents for Christmas. I’ve been considering it for at least two years… I see so many people rave about it. But I wasn’t sure what it would add over my existing kitchen implements. Now that I have an infant, though, and less time to cook, I thought it was finally time to get one and cut down on cooking time.

I’m still learning how to use it. The first two things I did were steamed broccoli and steamed artichokes. The artichokes were a little over steamed and the broccoli was way over steamed. And I’m not sure it cuts out time for steaming. Maybe for the artichokes it did. Then I made butternut squash soup. This went better. I’m not totally sure it was less work/time than making it in a Dutch oven, but it was pretty easy and quick.

And then today, I made a pot roast with potatoes, carrots, and onions. I had a 2.5 lb bottom round roast from Butcher Box. I looked up a recipe to make it in the Instant Pot and found this one from La Creme de la Crumb, which also called for carrots and potatoes – two things I had on my counter and needed a plan for. Check. 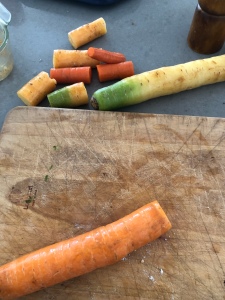 I used chicken stock, because that’s what I had on hand, and only 3 cups because that’s what I had and I forgot to add an extra cup of water until after I’d closed the lid and the pressure was building. My roast was smaller than in the recipe, so I hoped it would be ok. It was. I also did the pressure cooking step for 55 minutes instead of 60-80, again since my roast was smaller. I actually think this was a bad decision and that the meat would have benefited from a little more cooking time. It was a litttttttle tough to shred. But I didn’t need to shred it a ton, just into chunks.

It was so nice to do all the steps in one pot! And I made gravy! I’ve never made gravy. Clean up was super easy. I didn’t have to watch or stir or check or anything (except a bit during the gravy-making stage). It still took a while, but would’ve taken way longer on the stove or in the oven. I’m hooked. 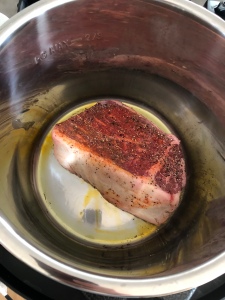 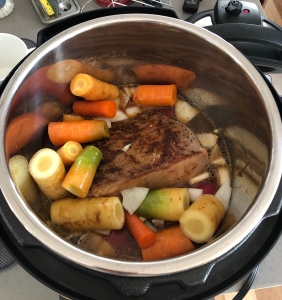 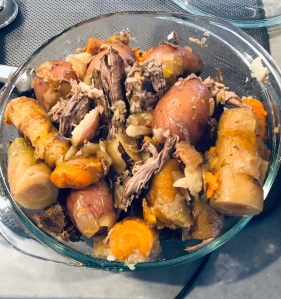 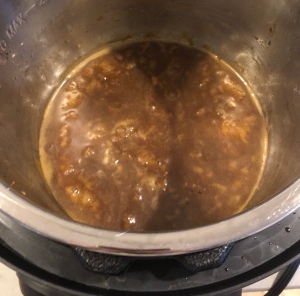 I ate it for dinner over some kale to get some greens in. I meant to give Gabriel some of the meat to suck on when I fed him solids for dinner, but I forgot.

We had leftovers for several meals. I’m not sure pot roast ever has been or will be a favorite meal of mine, but I would definitely consider doing it in the Instant Pot again!