Huge batch of egg bites for the weekday morning win. #breakfast #mealprep #neededtowritedowntherecioe
He definitely ate all the orecchiette pasta first, but then he rocked the rapini. #veggiewin #rapini #orecchiette #dipasquales #toddlerlunch
Devouring cauliflower as if they starved him at daycare today. 🤷‍♀️ #veggiesfirst #cauliflower #predinnersnacking
Recent posts on roasted carrots and cauliflower/potato soup. #carrots #roastedvegetables #fall #soup
Prepping vegetable packs for camping this weekend. Olive oil, salt, broccoli, red bell pepper, onion, and red potato. Bam. Wrap them up in foil, throw them on the fire, forget about them for a while, unwrap, and yum. #roastedvehetables #camping #mealprep #campfood
#cookonceeatallweek Week 14 Beef Ragu. #babyg is all about it. #dinner #mealprep #sundayfunday #zoodles

Having a kiddo changes almost everything. My social life revolves around nap schedules and a 7:30 bedtime, and it generally includes multiple individuals under age two. The books in my living room mostly max out at ten pages and are made of cardboard. ‘Kid’ has taken priority in my fiercely prioritized life over everything else. (If you’ve read my other posts or know me well, you know that ‘ everything else’ includes at the top: 8 hours of sleep, work, working out, eating well, husband, and friends, usually in that order.) Getting outside (that is, getting away from civilization) always fell somewhere on my list of priorities, albeit below all those other things, which is why it only happened a few times a year. And while having a kid has changed my priorities in unexpected ways (for example, it didn’t occur to me before having a kid that I would want to prioritize time with him over other things like working out or sleep, even though I knew I would often need to), it didn’t change that I still want to do all the things I used to do. Like travel. Like trying new restaurants. Like going camping and getting outside.

We went on our first camping adventure with baby in July, which is not normally a time of year in Maryland that I like to go camping. But it was lovely. We stayed in Cunningham Falls State Park.

We arrived in the afternoon, set up camp, and then hiked down to the Hunting Creek Lake and back. The lake was part of the park and had a beach and amenities. I wore Gabriel facing me in the ergo. We put him in a long-sleeve footed onesie outfit, I think because we were worried about bugs and sunshine, but it was a bad idea. Too hot. It was like 90 something degrees out. He was sweating. I was worried about him being dehydrated. But of course, everything ended up fine.

I don’t think Gabriel had a ‘bedtime’ yet then, but we put him to sleep at some point before I went to bed. I wasn’t doing that that often then – staying up past when he went to bed. But I did that night, and I sat in a camp chair and enjoyed the fire and the stars and just thought it was totally worth it. And that’s what I remember, not being tired.

I also remember sneaking out of the tent at 5am, hoping to get some me time. This is a feature of my past camping experiences that I really hope to retain. I’m often the first one up, and I have time to make myself coffee, sit by the fire pit, and just enjoy – alone. I was hoping to get to do that on this camping trip. I think I got far enough to have made coffee before Gabriel woke up. Alas.

We went for another hike from the campground. Gabriel mostly slept, if I recall (again in the ergo, facing me).

Then we drove home, feeling very accomplished. If I remember correctly, though, Gabriel screamed for almost all of the 1.5 hour drive from the backseat. Sigh. 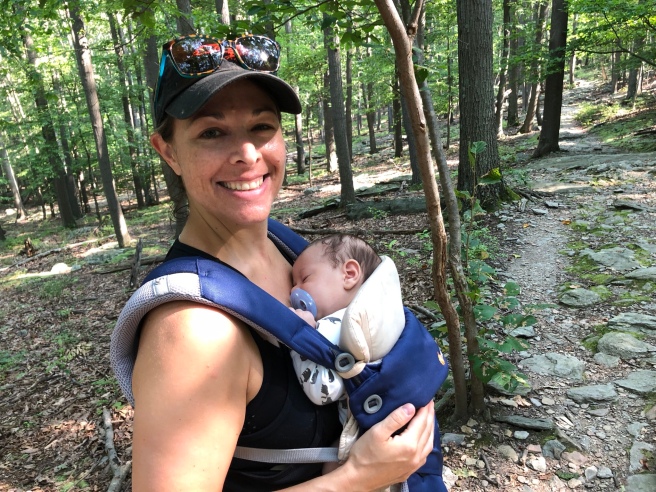 Our second camping trip was at the end of October, when Gabriel was five months old. We stayed at this historic nature preserve that Dan found on airbnb. It was actually totally bizarre. You can rent this whole, huge… space. Overlooking this water-filled quarry. So we did. It wasn’t a traditional campsite near hiking, but we were able to take a 1-2 mile walk around the quarry, which was nice.

Dan’s sister came with us. She slept in our backpacking tent, and we slept in a borrowed four-person tent. The weather was pretty cold and windy. We had to stay pretty bundled up the whole time. In general, I did not enjoy this trip as much. Gabriel was pretty fussy the whole time and was not ever content to not be held. This was generally true at that point in his life, and I also think he may have been cold. I did most of the holding of the fussy baby and didn’t get to do much else. 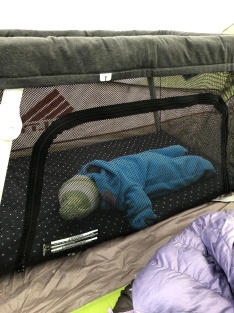 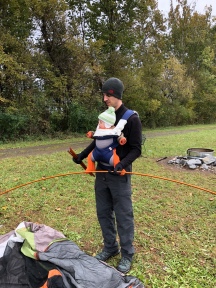 Our final trip with a baby (he hadn’t started toddling yet, so I think ‘baby’ is still appropriate) was to Wolf Gap in the George Washington and Jefferson Forests. It is in West Virginia, but right on the Virginia state line. It was about 2.5 hours driving time for us, and I was nervous about that. At the time, that would be the longest car trip we’d taken with Gabriel to date, and he’d been increasingly mobile and discontent to sit still (still true). But it actually went fine. We timed it well with naps, and he mostly slept. Our trip there took a total of about four hours, which included a detour into Shenandoah because we were there and also lunch in… Woodstock, VA, I think. Wolf Gap only has 9 sites, and I was a little worried about getting one, but there were a couple left when we arrived. We stayed in #8, I think. 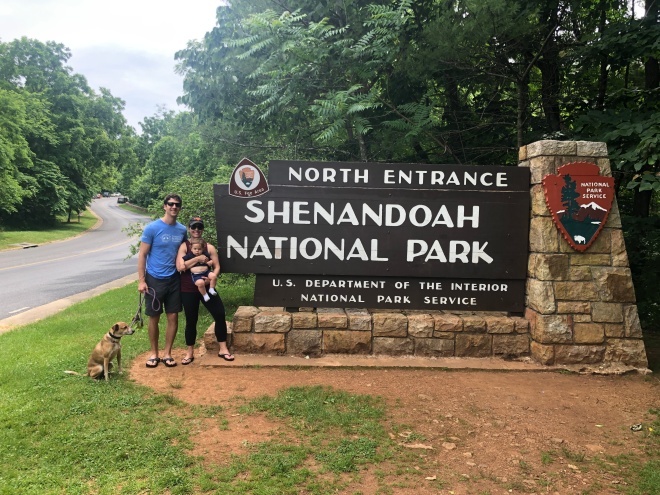 A friend we’ve often camped with (both since being in Maryland and when we lived in Atlanta) drove up from Knoxville to join us. He brought his small dog, so Clio had a friend as well.

Before this trip, we purchased our own tent mansion, and this was our first use. It worked great. We also brought what I lovingly call ‘the cage’ – one of those six-sided plastic gate play pen things. We didn’t use it a ton, but Gabriel was occasionally content to be in there for a few minutes at a time when we all needed our eyes and hands to put up the tent, wrangle the dogs, or whatever else. The dogs got more use out of it, though.

After setting up camp, we went for a hike from the campground up to Big Schloss peak. I think it was two miles each way. I wore Gabriel in the ergo on my back. It was my second time doing so, and it works okay, but it definitely convinced me that I want a real child carrier for hiking (just ordered, arriving this week, hooray!). He tolerated it okay, but couldn’t really see over my shoulder. He was pretty fussy by the end and wanted to get out. 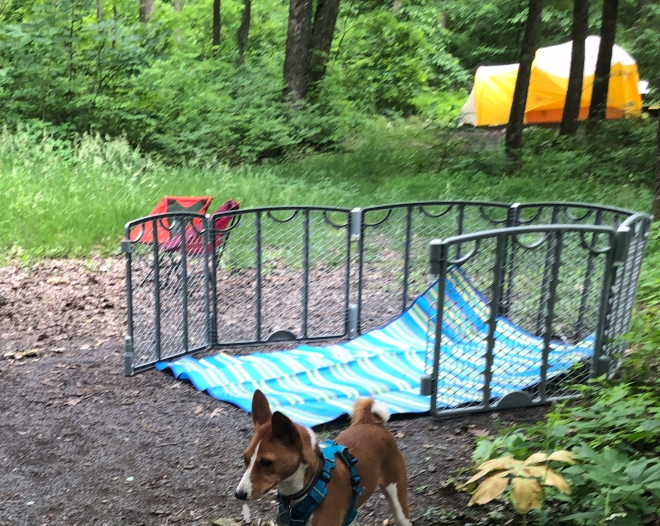 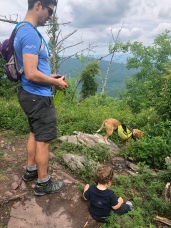 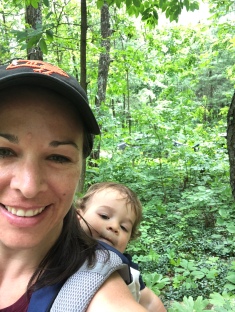 So. That’s how we’ve made camping work, so far.

I also still want to do the things I used to want to do, but never made time for. Like… kayaking. Like… a lot of mountain biking. Like… a daily yoga practice. But if I never (or rarely) made time for them before, I’m definitely not making time for them now. But I will keep finding a way to do the things at the top of my priority list. Next camping adventure: October.